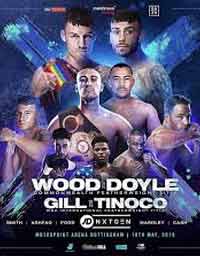 Review by AllTheBestFights.com: 2019-05-10, some good exchanges between Jordan Gill and Enrique Tinoco but it is not enough to get three stars: it gets two.

The undefeated Jordan Gill entered this fight with a perfect boxing record of 23-0-0 (7 knockouts) and he is ranked as the No.39 featherweight in the world. In his last three fights he has won over David Berna, Ryan Doyle and Emmanuel Dominguez (Jordan Gill vs Emmanuel Dominguez).
His opponent, Enrique Tinoco, has an official record of 17-5-4 (12 knockouts) but he is not ranked as he hasn’t fought since March 17, 2018 when he defeated Juan Miguel Beltran; before this bout, in February, he had tied with Pedro Duran. Gill vs Tinoco is valid for the WBA International featherweight title; undercard of Leigh Wood vs Ryan Doyle. Watch the video and rate this fight!