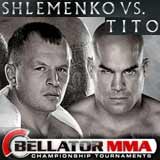 Review: 2014-05-17, the fight between Alexander Shlemenko and Tito Ortiz gets three stars thanks to a good finish. Alexander Shlemenko entered this fight with a mma record of 50-7-0 (74% finishing rate) and he is ranked as the No.8 middleweight in the world, he suffered his last defeat in 2010 when he faced Hector Lombard for the Bellator Mw title (via unanimous decision), since then he has collected 13 consecutive wins and managed to win the Bellator belt defeating Maiquel Falcao in 2013 (=Shlemenko vs Falcao). In this bout (against Ortiz) the Russian moved up in weight class to the light heavyweight division.
His opponent, Tito Ortiz, has a record of 16-11-1 (69% finishing rate) and he is not ranked as he hasn’t fought since July 7, 2012 when he was defeated by Forrest Griffin in their third bout (=Griffin vs Ortiz 3). Ortiz was the Ufc light heavyweight champion from April 2000 (when he defeated Wanderlei Silva) to September 2003 (beat by Randy Couture) but now he is 39 years old (10 years older than Shlemenko) and he lost seven out of his last nine fights. Shlemenko vs Ortiz is on the undercard of Quinton ‘Rampage’ Jackson vs ‘King Mo’ Lawal – Bellator 120. Watch the video and rate this fight!