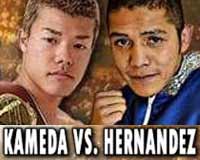 Review: 2014-11-01, pretty good fight between Tomoki Kameda and Alejandro Hernandez: it gets three stars. The undefeated Tomoki Kameda entered this fight with a perfect record of 30-0-0 (19 knockouts) and he is ranked as the No.2 bantamweight in the world (currently the #1 in this division is Shinsuke Yamanaka), he has fought once in 2014 beating Pungluang Sor Singyu.
His opponent, Alejandro Hernandez, has a record of 28-10-2 (15 knockouts) and he entered as the No.9 in the same weight class, he suffered his last defeat in 2013 when he faced Akifumi Shimoda; after that bout he has won three consecutive fights beating Daniel Rosas in his last one (=Hernandez vs Rosas). Kameda vs Hernandez is valid for the WBO bantamweight title; undercard of Andrzej Fonfara vs Doudou Ngumbu. Watch the video and rate this fight!