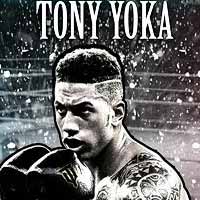 Review by AllTheBestFights.com: 2017-06-02, fight not particularly good between Tony Yoka and Travis Clark: it gets two stars.

The 2016 Olympic super heavyweight gold medalist Tony Yoka is at his professional boxing debut (Yoka’s amateur record is 60-12-0); he had also won the gold medal at the 2010 Summer Youth Olympics beating current Wbo champion Joseph Parker in the final.
His opponent, the undefeated Travis Clark, has a perfect record of 12-0-0 (8 knockouts) and he has already fought once in 2017 winning over Branden Lee Hinkle. Tony Yoka vs Travis Clark is the main event of the evening. Watch the video and rate this fight!