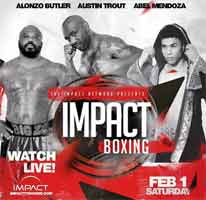 Review by AllTheBestFights.com: 2020-02-01, one sided fight between Austin Trout and Rosbel Montoya: it gets two stars.

The former Wba light-Mw champion Austin Trout entered this fight with a pro boxing record of 31-5-1 (17 knockouts) and he is ranked as the No.15 super welterweight in the world. In his last three bouts he has beat Juan De Angel, has been defeated by Jermell Charlo (Jermell Charlo vs Austin Trout) and has tied with Terrell Gausha (Austin Trout vs Terrell Gausha).
His opponent, Rosbel Montoya, has a record of 17-9-1 (13 KOs=76%) but he is not ranked as he hasn’t fought since June 24, 2018 when he beat Emir Montano; before this fight he had lost seven consecutive bouts. Trout vs Montoya is the main event of the evening. Watch the video and rate this fight!

Where: Inn of the Mountain Gods Resort and Casino, Ruidoso, New Mexico, USA