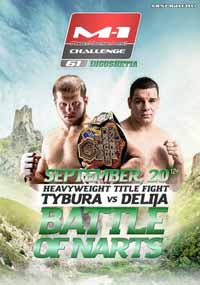 Review by AllTheBestFights.com: 2015-09-20, the fight between Marcin Tybura and Ante Delija gets two stars.

The M-1 Global Hw champion Marcin Tybura entered this fight with a professional mma record of 12-1-0 (83% finishing rate) and he is ranked as the No.22 heavyweight in the world but he comes off his first defeat, suffered against Stephan Puetz (bout not valid for the M1 title, Tybura vs Puetz).
His opponent, Ante Delija, has an official record of 14-2-0 (86% finishing rate) and he entered as the No.52 in the same weight class. He suffered his last loss in 2014, against Denis Smoldarev, but then he has won five consecutive fights. Tybura vs Delija, main event of M-1 Challenge 61, is valid for the M-1 Challenge heavyweight title (Tybura’s second defense). Watch the video and rate this fight!

Video:
Official highlights – we will post the full fight as soon a we find