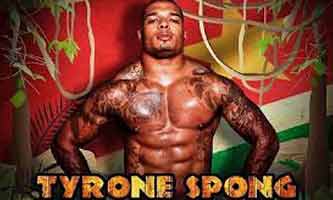 Review by AllTheBestFights.com: 2019-08-31, pretty good finish but it is not enough to get three stars: Tyrone Spong vs Jeyson Minda gets two.

The kickboxing champion Tyrone Spong entered this fight with a perfect boxing record of 13-0-0 (12 KOs=92%) and he is ranked as the No.69 heavyweight in the world. In his last three bouts he has won over Carlos Ailton Nascimento (Tyrone Spong vs Carlos Ailton Nascimento), Santander Silgado (Tyrone Spong vs Santander Silgado) and Ytalo Perea (Tyrone Spong vs Ytalo Perea).
His opponent, Jeyson Minda, has an official record of 14-1-1 (8 knockouts) and he entered as the No.441 middleweight. He was defeated by Magomed Madiev in 2017 but he came back to win against Darwin Arboleda in 2019. Spong vs Minda is the main event of the evening. Watch the video and rate this fight!