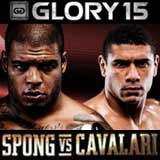 Review: 2014-04-12, nice and tough fight between Tyrone Spong and Saulo Cavalari: it gets three stars. Tyrone Spong entered this fight with a kickboxing record of 73-6-1 (46 knockouts) and he is ranked as the No.1 super cruiserweight in the world, he suffered his last defeat in 2010 when he faced Alistair Overeem in the quarterfinal of K-1 World GP 2010, since then he has collected nine consecutive wins and last year he won the Glory -95kg tournament defeating Danyo Ilunga in the final (=Spong vs Ilunga).
His opponent, Saulo Cavalari, has an official record of 28-2-0 (18 knockouts) and he entered as the No.5 in the same weight class, he suffered his only two defeats in 2012 when he faced Tomasz Sarara and Pavel Zhuravlev (=Zhuravlev vs Cavalari); he fought and won three times in 2013. Spong vs Cavalari is the semifinal of the Glory light heavyweight tournament; undercard of Robin van Roosmalen vs Marat Grigorian – Glory 15. Watch the video and rate this fight!

Video:
(Free embeddable video hosted on Youtube and not uploaded by AllTheBestFights, to report it please visit this link where the video is hosted)