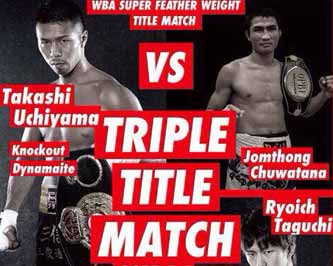 Review by AllTheBestFights.com: 2015-05-06, good exchanges between Takashi Uchiyama and Jomthong Chuwattana: it gets three stars.

Both undefeated, the Japanese Takashi Uchiyama entered this fight with a professional boxing record of 22-0-1 (18 KOs=81%) and he is ranked as the No.1 super featherweight in the world while his opponent, Jomthong Chuwattana, has a perfect record of 9-0-0 (4 knockouts) and he entered as the No.9 in the same weight class. Uchiyama fought just once in 2014 beating Israel Hector Enrique Perez (=Uchiyama vs Perez) while Chuwattana has already fought once in 2015 winning over Daiki Kaneko (=Kaneko vs Chuwattana); Jomthong is better known for his muay thai career since he was the Rajadamnern Stadium champion in three different weight classes and he has an outstanding kickboxing record of 189-36-4! Uchiyama vs Chuwatana is valid for the WBA Super World super featherweight title (held by Uchiyama). Watch the video and rate this fight!