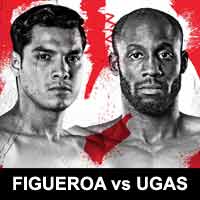 Review by AllTheBestFights.com: 2019-07-20, too much holding and too many interruptions between Yordenis Ugas and Omar Figueroa: it gets two stars.

The former Olympian Yordenis Ugas entered this fight with a boxing record of 23-4-0 (11 knockouts) and he is ranked as the No.6 welterweight in the world (currently the #1 in this division is Terence Crawford) but he comes off the loss against Shawn Porter (via split decision, Shawn Porter vs Yordenis Ugas). Before this bout, in 2018, he had beat Ray Robinson (Yordenis Ugas vs Ray Robinson), Jonathan Batista and Cesar Miguel Barrionuevo (Yordenis Ugas vs Cesar Miguel Barrionuevo).
His opponent, the undefeated former Wbc Lw champion Omar Figueroa Jr, has an official record of 28-0-1 (19 knockouts) and he entered as the No.18 in the same weight class. The only man who stopped him in a draw was Arturo Quintero in 2010, since then he has won 18 consecutive bouts defeating Robert Guerrero (4-stars fight, Omar Figueroa vs Robert Guerrero) and John Molina Jr in his last two (Omar Figueroa vs John Molina Jr). Ugas vs Figueroa, WBC welterweight title eliminator, is on the undercard of Manny Pacquiao vs Keith Thurman. Watch the video and rate this fight!