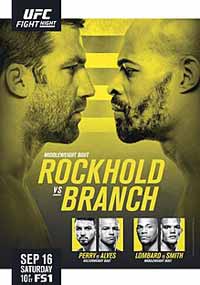 Review by AllTheBestFights.com: 2017-09-16, pretty good finish between Kamaru Usman and Sergio Moraes but it is not enough to get three stars: it gets two.

The Tuf winner Kamaru Usman entered this fight with a professional record of 10-1-0 (60% finishing rate) and he is ranked as the No.20 welterweight in the world. He suffered his only loss when he faced Jose Caceres at his second professional mma fight in 2013, since then he has collected nine consecutive victories beating Warlley Alves (=Usman vs Alves) and Sean Strickland in his last two (=Usman vs Strickland).
His opponent, the black belt in Bjj Sergio Moraes, has a mma record of 12-2-1 (67% finishing rate) and he entered as the No.45 in the same weight class. He lost to Cezar Ferreira in 2012 (=Ferreira vs Moraes), but then he has collected six victories and one draw beating Zak Ottow and Davi Ramos in his last two. Kamaru Usman vs Sergio Moraes is on the undercard of Luke Rockhold vs David Branch – UFC Fight Night 116. Watch the video and rate this fight!