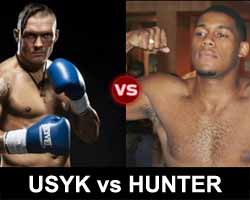 Review by AllTheBestFights.com: 2017-04-08, great performance by both boxers: Oleksandr Usyk vs Michael Hunter gets three stars.

Both undefeated, the 2012 Olympic heavyweight gold medalist and current Wbo champion Oleksandr Usyk entered this fight with a perfect record of 11-0-0 (10 KOs=91%) and he is ranked as the No.1 cruiserweight in the world while his opponent, Michael Hunter, has a boxing record of 12-0-0 (8 knockouts) and he entered as the No.18 in the same weight class. Both boxers fought twice last year: Usyk beat Krzysztof Glowacki (=Glowacki vs Usyk) and Thabiso Mchunu (=Usyk vs Mchunu) while Hunter won over Phil Williams and Isiah Thomas (=Hunter vs Thomas). Oleksandr Usyk vs Michael Hunter is valid for the WBO World cruiserweight title (Usyk’s second defense); undercard of Vasyl Lomachenko vs Jason Sosa. Watch the video and rate this fight!