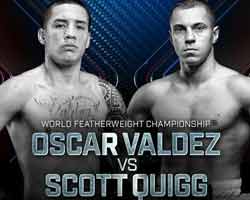 Review by AllTheBestFights.com: 2018-03-10, good performance by both boxers: Oscar Valdez vs Scott Quigg: gets three stars.

Th undefeated Wbo Fw champion Oscar Valdez entered this fight with a perfect boxing record of 23-0-0 (19 KOs=83%) and he is ranked as the No.7 featherweight in the world (currently the #1 in this division is Leo Santa Cruz). He fought twice last year winning over Miguel Marriaga (4-stars fight, Oscar Valdez vs Miguel Marriaga) and Genesis Servania (Oscar Valdez vs Genesis Servania).
His opponent, the former Wba super-Bw champion Scott Quigg, has a record of 34-1-2 (25 knockouts) and he entered as the No.6 in the same weight class. He suffered his only loss when he faced Carl Frampton in 2016 (via split decision, Frampton vs Quigg), after this bout he has defeated Jose Cayetano (Quigg vs Cayetano), Viorel Simion (Quigg vs Simion) and Oleg Yefimovych (Scott Quigg vs Oleg Yefimovych). Valdez vs Quigg is valid for the WBO World featherweight title (Valdez’ fourth defense – belt not on the line for Quigg since he failed to make the featherweight limit). Watch the video and rate this fight!