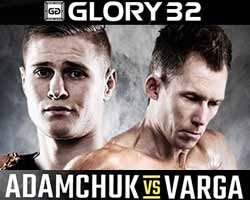 The Glory Fw champion Serhiy Adamchuk entered this fight with a professional kickboxing record of 33-5-0 (14 knockouts) and he is ranked as the No.4 super welterweight in the world. He suffered his last loss when he faced Deo Phetsangkhat in 2013, since then he has collected eight consecutive bouts winning the Glory belt last year, against Gabriel Varga in their first fight (=Varga vs Adamchuk I), and winning twice in 2016, with Mosab Amrani (=Adamchuk vs Amrani) and Mohammed El Mir.
His opponent, the black belt in karate and former Glory champion Gabriel Varga, has an official record of 12-3-0 (1 knockout) and he entered as the No.6 in the same weight class. After losing to Adamchuk in 2015 he came back to win against Liu Wei in 2016. Adamchuk vs Varga 2, main event of Glory 32, is valid for the Glory featherweight title (Adamchuk’s second defense). Watch the video and rate this fight!