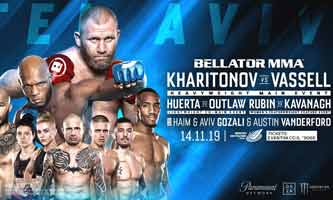 Review by AllTheBestFights.com: 2019-11-14, fight not so exciting between Sergei Kharitonov and Linton Vassell: it gets two stars.

Sergei Kharitonov entered this fight with a professional mma record of 29-6-0 (93% finishing rate) and he is ranked as the No.11 heavyweight in the world. He suffered his last loss when he faced Javy Ayala in 2016 (Sergei Kharitonov vs Javy Ayala), since then he has collected two no-contest and six victories beating Matt Mitrione in his last one (Matt Mitrione vs Sergei Kharitonov 2).
His opponent, Linton Vassell, has an official record of 18-8-0 (78% finishing rate) and he entered as the No.46 in the same weight class but he comes off three consecutive losses, against Ryan Bader (Ryan Bader vs Linton Vassell), Phil Davis (Phil Davis vs Linton Vassell) and Valentin Moldavsky (Linton Vassell vs Valentin Moldavsky). Kharitonov vs Vassell is the main event of Bellator 234. Watch the video and rate this fight!