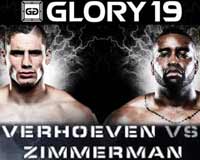 Review by AllTheBestFights.com: 2015-02-06, nice and tough battle between Rico Verhoeven and Errol Zimmerman: their third fight gets three stars.

Rico Verhoeven entered this fight with a professional kickboxing record of 44-10-1 (10 knockouts) and he is ranked as the No.1 heavyweight in the world but he lost his last fight, against Andrei Herasimchuk at Kunlun Fight 15 (=Verhoeven vs Herasimchuk); before this bout he had fought just once in 2014 beating Daniel Ghita in their rematch (=Verhoeven vs Ghita 2).
His opponent, Errol Zimmerman, has an official record of 79-20-1 (44 knockouts) and he entered as the No.3 in the same weight class, he suffered his last defeat in 2013 when he faced Daniel Ghita in their second bout (=Ghita vs Zimmerman 2); after this fight he has defeated Ben Edwards (=Zimmerman vs Edwards) and Anderson ‘Braddock’ Silva (=Zimmerman vs Silva). In their first bout Zimmerman defeated Verhoeven in less than a minute (on January 28, 2012 Zimmerman vs Verhoeven I) while in their second fight Errol lost by unanimous decision. Verhoeven vs Zimmerman 3, main event of Glory 19, is valid for the Glory heavyweight title (held by Verhoeven). Watch the video and rate this fight!