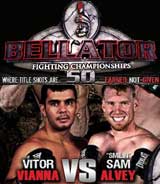 Review: 2011-09-17, the fight between Vitor Vianna and Sam Alvey was not very exciting: 2 stars (Bellator 50). Vianna defeated Sam Alvey by split decision and won the quarterfinal of the Bellator Middleweight Tournament. Watch the video!

Other fights on the card:
Bryan Baker vs Jared Hess
Brian Rogers vs Victor O’Donnell
Alexander Shlemenko vs Zelg Galesic