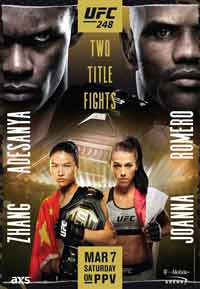 Review by AllTheBestFights.com: 2020-03-07, pretty good fight between Rodolfo Vieira and Saparbek Safarov: it gets three stars.

The undefeated black belt and former ADCC, Brazilian jiu jitsu world champion (four times) Rodolfo Vieira entered this fight with a perfect mma record of 6-0-0 (100% finishing rate) and he is ranked as the No.80 middleweight in the world. In his last three fights he has won over Jacob Holyman-Tague, Vitaliy Nemchinov and Oskar Piechota (Rodolfo Vieira vs Oskar Piechota).
His opponent, Saparbek Safarov, has an official record of 9-2-0 (89% finishing rate) and he entered as the No.96 light heavyweight. He lost two consecutive bouts between 2016 and 2018, against Gian Villante and Tyson Pedro (Tyson Pedro vs Saparbek Safarov), but he came back to win with Nicolae Negumereanu in 2019. Vieira vs Safarov is on the undercard of Israel Adesanya vs Yoel Romero – UFC 248. Watch the video and rate this fight!