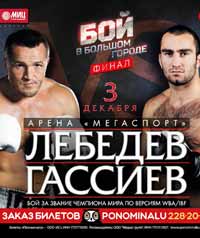 Review by AllTheBestFights.com: 2016-12-03, pretty good finish between Rakhim Chakhkiev and Maksim Vlasov but it is not enough to get three stars: it gets two.

The 2008 Olympic heavyweight gold medalist Rakhim Chakhkiev entered this fight with a professional record of 26-2-0 (19 knockouts) and he is ranked as the No.16 cruiserweight in the world. He lost to Ola Afolabi last year (4-stars fight, Chakhkiev vs Afolabi), but he came back to win in 2016 beating Tamas Lodi (=Chakhkiev vs Lodi) and Alejandro Emilio Valori (=Chakhkiev vs Valori).
His opponent, Maksim Vlasov, has a boxing record of 36-2-0 (19 knockouts) and he entered as the No.29 in the same weight class. He was defeated by Gilberto Ramirez Sanchez in 2015 (=Ramirez vs Vlasov) but then he has won six bouts beating Ismayl Sillah and Carlos Ailton Nascimento in his last two. Chakhkiev vs Vlasov is valid for the vacant WBA International cruiserweight title; undercard of Denis Lebedev vs Murat Gassiev. Watch the video and rate this fight!