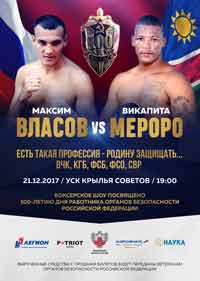 Review by AllTheBestFights.com: 2017-12-21, fight not particularly good between Maksim Vlasov and Vikapita Meroro: it gets two stars.

Maksim Vlasov entered this fight with a professional boxing record of 41-2-0 (24 knockouts) and he is ranked as the No.9 cruiserweight in the world (currently the #1 in this division is Oleksandr Usyk). He was defeated by Gilberto Ramirez Sanchez in 2015 (=Ramirez vs Vlasov) but then he has won ten consecutive bouts beating Rakhim Chakhkiev at the end of 2016 (=Chakhkiev vs Vlasov) and Tamas Lodi, Mussa Ajibu, Denton Daley in 2017.
His opponent, Vikapita Meroro, has an official record of 28-7-0 (14 knockouts) but he comes off two consecutive losses, against Dmitry Kudryashov in 2015 (=Kudryashov vs Meroro) and with Kevin Lerena in 2017. Vlasov vs Meroro is the main event of the evening. Watch the video and rate this fight!