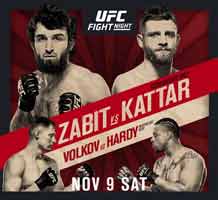 Review by AllTheBestFights.com: 2019-11-09, disappointing fight between Alexander Volkov and Greg Hardy: it gets two stars.

The former Bellator and M-1 Global Hw champion Alexander Volkov entered this fight with a pro record of 30-7-0 (77% finishing rate) and he is ranked as the No.9 heavyweight in the world (currently the #1 in this division is Stipe Miocic). He fought twice last year beating Fabricio Werdum (Fabricio Werdum vs Alexander Volkov) and losing to Derrick Lewis (Alexander Volkov vs Derrick Lewis).
His opponent, the former American football NFL defensive end Greg Hardy (who replaces Junior dos Santos), has an official mma record of 5-1-0 (100% ko/tko victory rate – he has never won via submission) and he entered as the No.105 in the same weight class. He lost to Allen Crowder in January (Greg Hardy vs Allen Crowder) but then he has beat Dmitry Smoliakov (Greg Hardy vs Dmitry Smoliakov) and Juan Adams (Greg Hardy vs Juan Adams); after this bout he has also faced Ben Sosoli but the fight ended in a no-contest (Greg Hardy vs Ben Sosoli). Volkov vs Hardy is on the undercard of Zabit Magomedsharipov vs Calvin Kattar – UFC Fight Night 163 (UFC on ESPN+ 21). Watch the video and rate this fight!