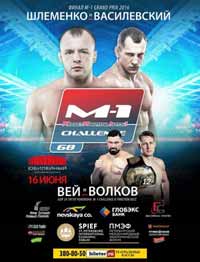 Review by AllTheBestFights.com: 2016-06-16, good exchanges between Alexander Volkov and Attila Vegh: it gets three stars.

The former Bellator and current M-1 Global Hw champion Alexander Volkov entered this fight with a pro mma record of 25-6-0 (80% finishing rate) and he is ranked as the No.23 heavyweight in the world. He suffered two consecutive losses in 2015, against Tony Johnson (=Volkov vs Johnson) and Cheick Kongo (=Kongo vs Volkov), but he came back to win in 2016 with Denis Smoldarev (=Volkov vs Smoldarev).
His opponent, the black belt in karate and former Bellator light-Hw champion Attila Vegh, has a record of 29-6-2 (72% finishing rate) and he entered as the No.44 light heavyweight but he comes off two defeats, both by split decision: against Emanuel Newton (=Vegh vs Newton 2) and Goran Reljic (=Vegh vs Reljic). Volkov vs Vegh is valid for the M-1 Challenge heavyweight title (Volkov’s first defense); undercard of Alexander Shlemenko vs Vyacheslav Vasilevsky 2 – M-1 Challenge 68. Watch the video and rate this fight!