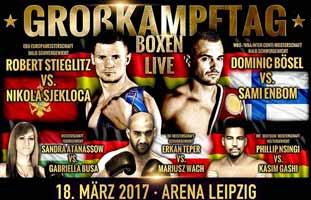 Review by AllTheBestFights.com: 2017-03-18, some good exchanges between Erkan Teper and Mariusz Wach but it is not enough to get three stars: it gets two.

Erkan Teper entered this fight with a record of 16-1-0 (10 knockouts) and he is ranked as the No.10 heavyweight in the world (currently the #1 in this division is Anthony Joshua). He fought twice last year beating Derric Rossy (=Teper vs Rossy) and losing to Christian Hammer (=Teper vs Hammer).
His opponent, Mariusz Wach, has a boxing record of 32-2-0 (17 knockouts) and he entered as the No.44 in the same weight class. He suffered his last loss when he faced Alexander Povetkin in 2015 (=Povetkin vs Wach); after this bout he came back to win in 2016 defeating Marcelo Luiz Nascimento. Mariusz Wach vs Erkan Teper is on the undercard of Robert Stieglitz vs Nikola Sjekloca. Watch the video and rate this fight!