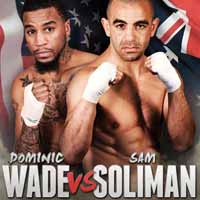 Review by AllTheBestFights.com: 2015-06-26, disappointing fight between Sam Soliman and Dominic Wade: it gets two stars.

The 41-year-old Sam Soliman (16 years older than Wade) entered this fight with a professional boxing record of 44-12-0 (18 knockouts) and he is ranked as the No.7 middleweight in the world (currently the #1 in this division is Gennady Golovkin). He won the IBF Mw title last year, against Felix Sturm (=Sturm vs Soliman 2), but then he lost it at his first defense, against Jermain Taylor (=Soliman vs Taylor).
His opponent, the undefeated Dominic Wade, has a perfect record of 17-0-0 (12 knockouts) and he entered as the No.27 in the same weight class; he fought four times last year beating Eddie Hunter in his last fight. Soliman vs Wade is the main event of the evening. Watch the video and rate this fight!