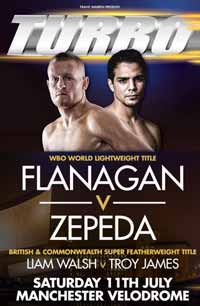 Review by AllTheBestFights.com: 2015-07-11, pretty good finish between Liam Walsh and Isaias Sampaio but it is not enough to get three stars: it gets two.

The undefeated Liam Walsh entered this fight with a perfect record of 18-0-0 (12 knockouts) and he is ranked as the No.26 super featherweight in the world while his opponent, Isaias Santos Sampaio, has a record of 23-10-0 (21 KOs=91%). Both boxers have already fought in 2015: Walsh has beat Joe Murray while Sampaio has won four bouts. Walsh vs Sampaio is valid for the vacant WBO Inter-Continental lightweight title; undercard of Terry Flanagan vs Jose Zepeda. Watch the video and rate this fight!