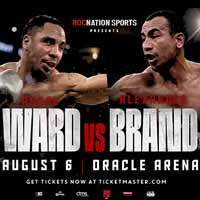 Review by AllTheBestFights.com: 2016-08-06, fight not particularly good between Andre Ward and Alexander Brand: it gets two stars.

The undefeated former Wba and Wbc super-Mw champion Andre Ward entered this fight with a perfect record of 29-0-0 (15 knockouts) and he is ranked as the No.3 light heavyweight in the world (currently the #1 in this division is Sergey Kovalev). Ward fought just twice since the end of 2013 beating Paul Smith in 2015 (=Ward vs Smith) and Sullivan Barrera in 2016 (=Ward vs Barrera).
His opponent, Alexander Brand, has a boxing record of 25-1-0 (19 knockouts) and he entered as the No.26 super middleweight. He suffered his only loss when he faced Badou Jack in 2012 (via split decision), since then he has won eight consecutive fights. Ward vs Brand is the main event of the evening. Watch the video and rate this fight!