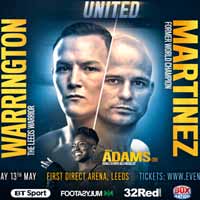 Review by AllTheBestFights.com: 2017-05-13, close and tough fight between Josh Warrington and Kiko Martinez: it gets three stars.

The undefeated Josh Warrington entered this fight with a perfect record of 24-0-0 (5 knockouts) and he is ranked as the No.8 featherweight in the world. He fought twice in 2016 beating Hisashi Amagasa (=Warrington vs Amagasa) and Patrick Hyland (=Warrington vs Hyland).
His opponent, the former Ibf super-Bw champion Kiko Martinez, has an official record of 36-7-1 (26 knockouts) and he entered as the No.18 in the same weight class. He fought three times last year losing to current #1 Fw Leo Santa Cruz (2016 Fight of the Year candidate, Santa Cruz vs Martinez), drawing with Eusebio Osejo and winning over Leonel Hernandez. Josh Warrington vs Kiko Martinez is valid for the WBC International featherweight title; they also faced each other a second time on March 26, 2022 (Kiko Martinez vs Josh Warrington 2). Watch the video and rate this fight!