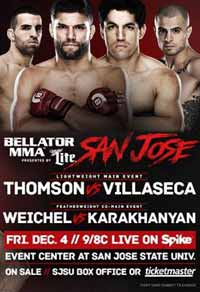 Review by AllTheBestFights.com: 2015-12-04, some good single shots between Daniel Weichel and Georgi Karakhanyan but it is not enough to get three stars: it gets two.

The black belt in Brazilian jiu-jitsu and former M-1 Global Lw champion Daniel Weichel entered this fight with a professional record of 35-9-0 (74% finishing rate) and he is ranked as the No.12 featherweight in the world but he comes off the loss against Patricio Freire (=Freire vs Weichel).
His opponent, the black belt in Bjj and former Wsof Fw champion Georgi Karakhanyan, has a mma record of 24-4-0 (75% finishing rate) and he entered as the No.26 in the same weight class. He lost to Rick Glenn in 2014 (=Karakhanyan vs Glenn) but he came back to win in 2015 defeating Bubba Jenkins (=Karakhanyan vs Jenkins). Weichel vs Karakhanyan is on the undercard of Josh Thomson vs Pablo Villaseca – Bellator 147. Watch the video and rate this fight!