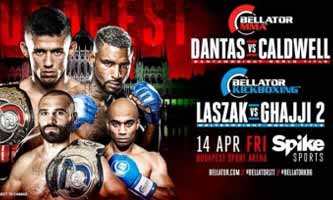 Review by AllTheBestFights.com: 2017-04-14, fight not particularly good between Daniel Weichel and John Teixeira da Conceicao: it gets two stars.

The black belt in Brazilian jiu-jitsu and former M-1 Global Lw champion Daniel Weichel entered this fight with a pro mma record of 38-9-0 (71% finishing rate) and he is ranked as the No.11 featherweight in the world. He suffered his last loss when he faced Patricio Freire in 2015 (=Freire vs Weichel) but then he has won over Georgi Karakhanyan (=Weichel vs Karakhanyan), Emmanuel Sanchez (=Weichel vs Sanchez) and Brian Moore (=Weichel vs Moore).
His opponent, the black belt in Bjj John Teixeira da Conceicao, has a record of 21-1-2 (67% finishing rate) and he entered as the No.24 in the same weight class. ‘Macapa’ Teixeira suffered his only loss when he faced Hugo Viana in 2012, since then he has collected nine victories and one draw beating Justin Lawrence in his last one (=Lawrence vs Teixeira). Daniel Weichel vs John Teixeira da Conceicao is on the undercard of Eduardo Dantas vs Leandro Higo – Bellator 177. Watch the video and rate this fight!