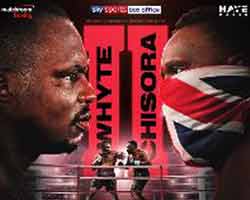 Review by AllTheBestFights.com: 2018-12-22, nice and tough exchanges between Dillian Whyte and Dereck Chisora 2: it gets three stars.

Dillian Whyte entered this fight with a record of 24-1-0 (17 knockouts) and he is ranked as the No.6 heayweight in the world. He suffered his only loss when he faced current #1 Anthony Joshua in 2015 (4-stars fight, Joshua vs Whyte, curiously Whyte defeated Joshua by unanimous decision in his first amateur bout in 2009), after this fight he has won eight bouts beating Lucas Browne (Dillian Whyte vs Lucas Browne) and Joseph Parker in 2018 (Dillian Whyte vs Joseph Parker).
His opponent, Dereck Chisora, has a boxing record of 29-8-0 (21 knockouts) and he entered as the No.11 in the same weight class. He lost to Agit Kabayel last year (Dereck Chisora vs Agit Kabayel) but he came back to win in 2018 beating Zakaria Azzouzi and Carlos Takam (4-stars fight, Dereck Chisora vs Carlos Takam). In their first bout Whyte defeated Chisora via split decision (December 10, 2016 – Dereck Chisora vs Dillian Whyte I); this second fight is the main event of the evening. Watch the video and rate this fight!

better quality but in Ukrainian
https://www.youtube.com/watch?v=41PyTHK1734