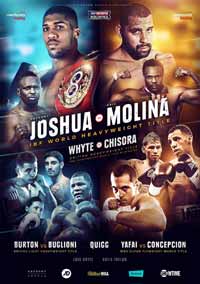 Review by AllTheBestFights.com: 2016-12-10, close fight with some tough exchanges: Dillian Whyte vs Dereck Chisora is close to get four stars!

Dereck Chisora entered this fight with a boxing record of 26-6-0 (18 knockouts) and he is ranked as the No.8 heavyweight in the world (currently the #1 in this division is Luis Ortiz). He has fought three times in 2016 beating Andras Csomor and Drazan Janjanin but between these two bouts he has lost to Kubrat Pulev (=Pulev vs Chisora).
His opponent, Dillian Whyte, has an official record of 19-1-0 (15 KOs=79%) and he entered as the No.27 in the same weight class. He suffered his only loss when he faced Anthony Joshua last year (4-stars fight, Joshua vs Whyte), after this bout he has won three fights winning over Ivica Bacurin, David Allen and Ian Lewison. Chisora vs Whyte is on the undercard of Anthony Joshua vs Eric Molina; they also faced each other a second time on December 22, 2018 (Dillian Whyte vs Dereck Chisora 2). Watch the video and rate this fight!