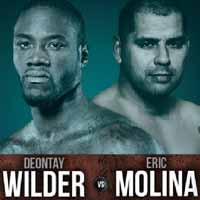 Review by AllTheBestFights.com: 2015-06-13, Evander Holyfield’s face at the end of the fight tells everything: disappointing fight, Deontay Wilder vs Eric Molina gets two stars.

The undefeated Deontay Wilder entered this fight with a perfect boxing record of 33-0-0 (32 KOs=97%) and he is ranked as the No.4 heavyweight in the world (currently the #1 in this division is Wladimir Klitschko). In his last three bouts Wilder beat Malik Scott (=Wilder vs Scott), Jason Gavern (=Wilder vs Gavern) and Bermane Stiverne (fight in which he has won the Wbc belt, Stiverne vs Wilder).
His opponent, Eric Molina, has an official record of 23-2-0 (17 knockouts) and he entered as the No.44 in the same weight class. He suffered his last loss in 2012 when he faced Chris Arreola (=Arreola vs Molina), since then he has won five consecutive bouts beating Raphael Zumbano Love in his last fight. Wilder vs Molina is valid for the WBC World heavyweight title (Wilder’s first defense). Watch the video and rate this fight!