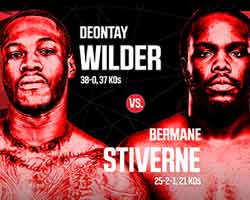 Review by AllTheBestFights.com: 2017-11-04, good finish between Deontay Wilder and Bermane Stiverne 2: it gets three stars.

The undefeated Wbc Hw champion Deontay Wilder entered this fight with a perfect boxing record of 38-0-0 (37 KOs=97%) and he is ranked as the No.3 heavyweight in the world (currently the #1 in this division is Anthony Joshua). In his last three bouts he has won over Artur Szpilka (=Wilder vs Szpilka), Chris Arreola (=Wilder vs Arreola) and Gerald Washington (=Wilder vs Washington).
His opponent, the former Wbc Hw champion Bermane Stiverne (who replaces Luis Ortiz), has an official record of 25-2-1 (21 KOs=84%) but he is not ranked as he hasn’t fought since November 14, 2015 when he defeated Derric Rossy; before this bout he had lost to Wilder in their first fight (=Stiverne vs Wilder I). Wilder vs Stiverne 2 is valid for the WBC World heavyweight title (Wilder’s fifth defense). Watch the video and rate this fight!