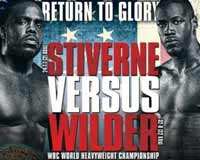 Review by AllTheBestFights.com: 2015-01-17, fight not particularly exciting between Bermane Stiverne and Deontay Wilder: it gets two stars.

Bermane Stiverne entered this fight with a professional boxing record of 24-1-1 (21 KOs=87%) and he is ranked as the No.4 heavyweight in the world (currently the #1 in this division is Wladimir Klitschko); the only fight he lost was in 2007, against the unknown Demetrice King, since then he has collected twelve victories and one draw winning the Wbc title in his only bout of 2014, the rematch against Chris Arreola (=Stiverne vs Arreola 2).
His opponent, the undefeated Deontay Wilder, has a perfect record of 32-0-0 (32 KOs=100%) and he entered as the No.10 in the same weight class, he fought twice last year, beating Malik Scott (=Wilder vs Scott) and Jason Gavern (=Wilder vs Gavern). Stiverne vs Wilder is valid for the WBC World heavyweight title (Stiverne’s first defense); they also faced each other a second time on November 4, 2017 (=Deontay Wilder vs Bermane Stiverne 2). Watch the video and rate this fight!

Video: (Free embeddable video hosted on Kset.kz and not uploaded by AllTheBestFights, to report it please visit this link where the video is hosted)