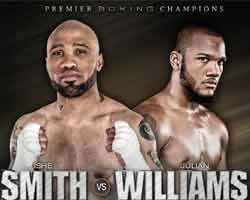 Review by AllTheBestFights.com: 2017-11-18, good fight between Ishe Smith and Julian Williams: it gets three stars.

Julian Williams entered this fight with a professional boxing record of 23-1-1 (15 knockouts) and he is ranked as the No.9 super welterweight in the world (currently the #1 in this division is Erislandy Lara). He suffered his first loss last year against Jermall Charlo (=Charlo vs Williams) but he came back to win in 2017 with Joshua Conley (=Williams vs Conley).
His opponent, the former Ibf light-Mw champion Ishe Smith, has an official record of 29-8-0 (12 knockouts) but he is not ranked as he hasn’t fought since September 16, 2016 when he defeated Frank Galarza (=Smith vs Galarza); before this bout, in 2015, he had beat Tommy Rainone, but he had also lost to Vanes Martirosyan (via majority decision, Martirosyan vs Smith). Williams vs Smith is the main event of the evening. Watch the video and rate this fight!