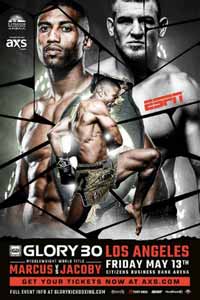 Review by AllTheBestFights.com: 2016-05-13, nice and close fight between Jason Wilnis and Joe Schilling: it gets three stars.

The former Glory and Wbc muay thai champion Joe Schilling entered this fight with a kickboxing record of 21-7-0 (12 knockouts) and he is ranked as the No.3 cruiserweight in the world. He lost to Artem Levin in 2014 (=Schilling vs Levin 2) but then he has won three consecutive bouts beating Mike Lemaire in 2016 (=Schilling vs Lemaire).
His opponent, Jason Wilnis, has a record of 27-6-1 (13 knockouts) and he entered as the No.4 in the same weight class. He lost the first fight with Joe Schilling, held in 2015 (=Schilling vs Wilnis), but he came back to win in 2016 defeating Wang Chongyang and Filip Verlinden. Schilling vs Wilnis 2 is on the undercard of Simon Marcus vs Dustin Jacoby – Glory 30. Watch the video and rate this fight!

Official video:
the fight Schilling vs Wilnis starts at 24:33