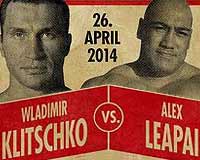 Review: 2014-04-26, fight not particularly exciting between Wladimir Klitschko and Alex Leapai: it gets two stars. Wladimir Klitschko entered this fight with a professional boxing record of 61-3-0 (51 KOs=83%) and he is ranked as the No.1 heavyweight in the world, curiously he lost three out of three fights via ko/tko: against Ross Puritty in 1998, Corrie Sanders in 2003 (4 stars fight Sanders vs Klitschko) and Lamon Brewster in 2004; since then he has collected 19 consecutive wins.
His opponent, Alex Leapai, has an official record of 30-4-3 (24 KOs=80%) and he entered as the No.27 in the same weight class, he suffered his last defeat in 2012 when he faced Kevin Johnson, after that bout he fought and won five times. Klitschko vs Leapai is valid for the WBO, WBA, IBF, IBO heavyweight titles (all held by Klitschko). Watch the video and rate this fight!