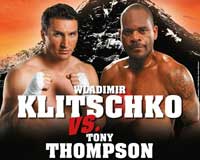 Review: 2012-07-07, even with two knockdowns (5th and 6th rounds) the second fight between Wladimir Klitschko and Tony Thompson has not been particularly good: two stars. Wladimir Klitschko ranked as the No.1 heavyweight in the world, entered the fight with a record of 57-3-0 while Tony Thompson had a record of 36-2-0 (Thompson is not ranked as he hasn’t fought since May 27, 2011). Klitschko vs Thompson 2 is valid for the WBO, WBA, IBF, IBO heavyweight titles; in their first fight Klitschko defeated Thompson by ko in the eleventh round (July 12, 2008). Watch the video!