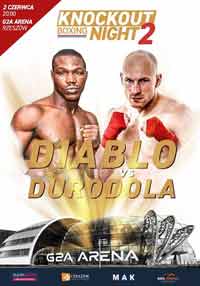 Review by AllTheBestFights.com: 2018-06-02, pretty boring fight between Krzysztof Wlodarczyk and Olanrewaju Durodola: it gets two stars.

The former Ibf and Wbc Cw champion Krzysztof Wlodarczyk entered this fight with a pro boxing record of 54-4-1 (38 knockouts) and he is ranked as the No.22 cruiserweight in the world. ‘Diablo’ fought twice last year beating Noel Gevor (Wlodarczyk vs Gevor) and losing to Murat Gassiev (Murat Gassiev vs Krzysztof Wlodarczyk); he came back to win in 2018 with Adam Gadajew (Krzysztof Wlodarczyk vs Adam Gadajew).
His opponent, the 2008 Olympian Olanrewaju Durodola, has a record of 27-5-0 (25 KOs=93%) and he entered as the No.34 in the same weight class but he comes off the loss against Maksim Vlasov (Maksim Vlasov vs Olanrewaju Durodola); before this bout, in 2017, he had beat Manroy Sadiki and Karama Nyilawila. Wlodarczyk vs Durodola is the main event of the evening. Watch the video and rate this fight!