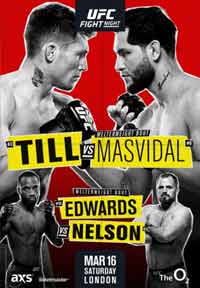 Nathaniel Wood entered this fight with a professional record of 15-3-0 (87% finishing rate) and he is ranked as the No.21 bantamweight in the world. He was defeated by Alan Philpott in 2016 but since then he has collected seven victories beating Luca Iovine, Johnny Eduardo and Andre Ewell in 2018.
His opponent, Jose Alberto Quinonez, has a mma record of 7-2-0 (43% finishing rate) and he entered as the No.49 in the same weight class. He lost two consecutive fights between 2013 and 2014, against Davi Ramos and Alejandro Perez, but then he has won four bouts defeating Teruto Ishihara last year. Wood vs Quinonez is on the undercard of Darren Till vs Jorge Masvidal – UFC Fight Night 147 (UFC on ESPN+ 5). Watch the video and rate this fight!