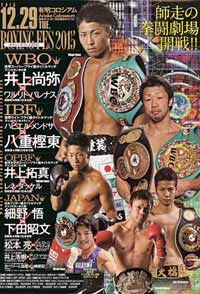 Review by AllTheBestFights.com: 2015-12-29, nice and tough fight between Javier Mendoza and Akira Yaegashi: it gets three stars.

Javier Mendoza entered this fight with a pro boxing record of 24-2-1 (19 KOs=79%) and he is ranked as the No.7 light flyweight in the world (currently the #1 in this division is Donnie Nietes). He suffered his last defeat when he faced Jorge Guerrero in 2011, since then he has won 11 consecutive fights beating Milan Melindo in his last one (=Melindo vs Mendoza).
His opponent, the former world champion in two different weight classes Akira Yaegashi, has a record of 22-5-0 (12 knockouts) and he entered as the No.10 flyweight. He lost two consecutive bouts in 2014, against Roman Gonzalez (=Yaegashi vs Gonzalez) and Pedro Guevara (=Yaegashi vs Guevara), but he came back to win in 2015 defeating Songseanglek Phosuwangym and Said M Said. Mendoza vs Yaegashi is valid for the IBF World light flyweight title (Mendoza’s second defense); undercard of Naoya Inoue vs Warlito Parrenas. Watch the video and rate this fight!