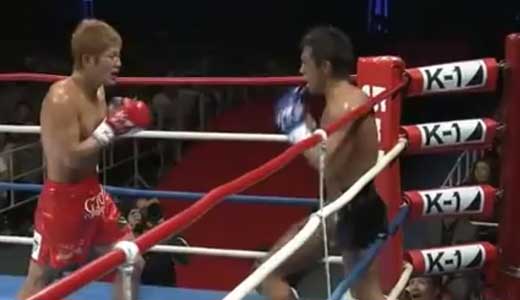 Review: 2011-09-25, very nice fight between Yuya Yamamoto and Kenta, semifinal of the “K-1 World MAX 2011 Japan Tournament Final”. After a good first round, in the second Kenta (black trunks) knocks down Yamamoto with a left high kick and after the counting he tries to end the fight with a nice combination of punches but Yuya survives and dominates Kenta in the third! Since the judges score a draw after three rounds, the fight continues in a spectacular fourth and last round. Yuya Yamamoto defeats Kenta by unanimous decision and gets to the final (that he loses against Yuji Nashiro). Watch the video!