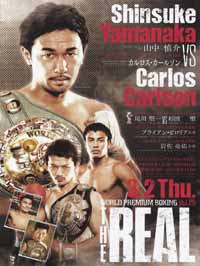 Review by AllTheBestFights.com: 2017-03-02, some good exchanges between Shinsuke Yamanaka and Carlos Carlson but it is not enough to get three stars: it gets two.

The undefeated Wbc champion Shinsuke Yamanaka entered this fight with a professional record of 26-0-2 (18 knockouts) and he is ranked as the No.1 bantamweight in the world. He fought twice last year winning over Liborio Solis (=Yamanaka vs Solis) and Anselmo Moreno (4-stars fight, Yamanaka vs Moreno 2).
His opponent, Carlos Carlson, has an official record of 22-1-0 (13 knockouts) and he entered as the No.41 in the same weight class. He suffered his only loss at his first pro boxing fight in 2011, against Andres Tapia; since then he has collected 22 consecutive victories beating Giovanni Caro and Alex Rangel in 2016. Shinsuke Yamanaka vs Carlos Carlson is valid for the WBC World bantamweight title. Watch the video and rate this fight!