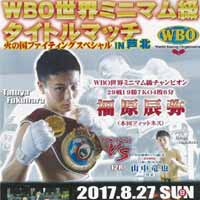 Review by AllTheBestFights.com: 2017-08-27, fight not so exciting between Tatsuya Fukuhara and Ryuya Yamanaka: it gets two stars.

The Wbo champion Tatsuya Fukuhara entered this fight with a record of 19-4-6 (7 knockouts) and he is ranked as the No.11 minimumweight in the world. He suffered his last loss when he faced Takuma Inoue in 2013, since then he has collected three draws and seven victories defeating Moises Calleros in 2017 (4-stars fight, Calleros vs Fukuhara).
His opponent, Ryuya Yamanaka, has an official boxing record of 14-2-0 (4 knockouts) and he entered as the No.17 in the same weight class. He lost to Roque Lauro in 2014 but then he has won seven consecutive bouts beating Khanongmek Sithkrukong in his last one. Tatsuya Fukuhara vs Ryuya Yamanaka is valid for the WBO World minimumweight title. Watch the video and rate this fight!

Report broken video
« 2017 BOXING fight – Noel Gevor vs Isiah Thomas – full fight Video
2017 BOXING fight – Yves Ulysse Jr vs Ricky Sismundo – full fight Video »
HELP US!!! Since the CORONAVIRUS pandemic started, AllTheBestFights.com has struggled to survive! If you have enjoyed this website for the past 10 years, today we ask you for a little help: