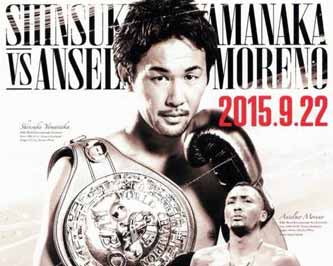 Review by AllTheBestFights.com: 2015-09-22, pretty good finish between Shinsuke Yamanaka and Anselmo Moreno but it is not enough to get three stars: it gets two.

The undefeated Shinsuke Yamanaka entered this fight with a professional boxing record of 23-0-2 (17 knockouts) and he is ranked as the No.1 bantamweight in the world. He has already fought once in 2015 beating Diego Ricardo Santillan (=Yamanaka vs Santillan).
His opponent, Anselmo Moreno, has an official record of 35-3-1 (12 knockouts) and he entered as the No.16 in the same weight class but he comes off the defeat against Juan Carlos Payano (bout in which he lost the Wba Bw belt, Moreno vs Payano). Yamanaka vs Moreno is valid for the WBC World bantamweight title (Yamanaka’s ninth consecutive defense); ; they also faced each other a second time on September 16, 2016 (=Shinsuke Yamanaka vs Anselmo Moreno 2). Watch the video and rate this fight!