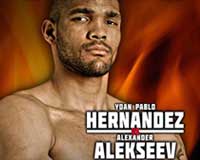 Review: 2013-11-23, good fight with two knockdowns and a spectacular finish: Yoan Pablo Hernandez vs Alexander Alekseev gets three stars. Alexander Alekseev ranked as the No.5 cruiserweight in the world, entered the fight with a record of 24-2-1 (20 KOs=83%) while Yoan Pablo Hernandez had a record of 27-1-0 (13 knockouts; Hernandez is not ranked as he hasn’t fought since September 15, 2012 when he defeated Troy Ross). Hernandez vs Alekseev is valid for the IBF cruiserweight title (Hernandez’s third defense). Watch the video!