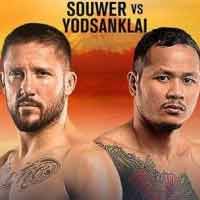 Review by AllTheBestFights.com: 2019-03-31, good fight between Andy Souwer and Yodsanklai Fairtex 2: it gets three stars.

The former K-1 World Max, Iska and Wmta champion Andy Souwer entered this fight with a professional kickboxing record of 160-21-1 (98 knockouts) but he comes off two consecutive losses, against Anthony Njokuani and Tayfun Ozcan; before these two bouts, in 2016, he had beat Miyakoshi Souichiro, Mohamed Khamal (Andy Souwer vs Mohamed Khamal) and Damian Segovia.
His opponent, the former WBC, WMC, WPMF and two-time Lumpinee Stadium champion Yodsanklai Fairtex, has an official record of 201-71-4 (78 knockouts) and he entered as the No.5 super welterweight in the world. He suffered his last loss when he faced Artur Kyshenko in 2011 (4-stars-fight, Kyshenko vs Yodsanklai), since then he has won 30 consecutive fights beating Enriko Kehl, Chris Ngimbi, Yuan Bing and Luis Regis in 2018. In their first bout Souwer had beat Yodsanklai (March 2, 2008); this second fight is one the undercard of Eduard Folayang vs Shinya Aoki 2 – ONE FC 93. Watch the video and rate this fight!