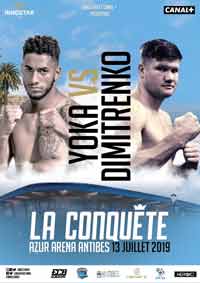 Review by AllTheBestFights.com: 2019-07-13, pretty good finish between Tony Yoka and Alexander Dimitrenko but it is not enough to get three stars: it gets two.

The 2016 Olympic super heavyweight gold medalist Tony Yoka entered this fight with a perfect record of 5-0-0 (4 KOs=80%) but he is not ranked because in July 2018, the French Anti-Doping Agency banned him for one year because of missing three drug tests. He had fought twice last year beating Cyril Leonet (Tony Yoka vs Cyril Leonet) and David Allen (Tony Yoka vs David Allen).
His opponent, Alexander Dimitrenko, has an official record of 41-5-0 (26 knockouts) and he entered as the No.36 in the same weight class but he comes off two consecutive losses, against current #1 Hw Andy Ruiz Jr (Andy Ruiz Jr vs Alexander Dimitrenko) and with Bryant Jennings (Bryant Jennings vs Alexander Dimitrenko); before these two bouts, in 2017, he had won over Miljan Rovcanin (Alexander Dimitrenko vs Miljan Rovcanin). Yoka vs Dimitrenko is the main event of the evening. Watch the video and rate this fight!