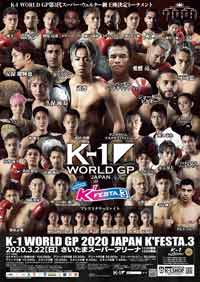 Review by AllTheBestFights.com: 2020-03-22, close fight but not so exciting: Takei Yoshiki vs Dansiam Ayothaya Fight Gym gets two stars.

The K-1 world super-Bw champion Yoshiki Takei entered this fight with a pro kickboxing record of 22-2-0 (16 knockouts) and he is ranked as the No.1 featherweight in the world while his opponent, Dansiam Ayothaya Fight Gym, has a record of 76-23-3 (7 knockouts). Takei lost two consecutive bouts in 2015, against Tenma Sano and Haruma Saikyo (both via majority decision), but then he has won 21 fights beating Shuhei Kumura, Masashi Kumura and Suriyanlek Aor.Bor.Tor. Kampee in his last three. Dansiam is on the undercard of Takeru vs Petchdam Petchkiatpetch – K-1 K’Festa 3. Watch the video and rate this fight!