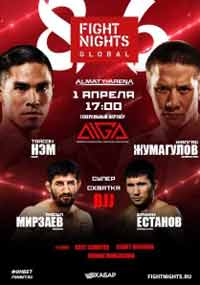 Review by AllTheBestFights.com: 2018-04-01, some good exchanges between Tyson Nam and Zhalgas Zhumagulov but it is not enough to get three stars: it gets two.

Tyson Nam entered this fight with a professional mma record of 16-8-1 (62% finishing rate) and he is ranked as the No.14 flyweight in the world. He lost four consecutive fights between 2013 and 2014 but then he has collected four victories and one draw beating Ali Bagautinov (Ali Bagautinov vs Tyson Nam) and Rizvan Abuev in 2017.
His opponent, Zhalgas Zhumagulov, has an official record of 10-3-0 (70% finishing rate) and he entered as the No.75 in the same weight class. He fought three times last year defeating Artur Bagautinov and Shaj Haque but between these two bouts he lost to Vartan Asatryan. Nam vs Zhumagulov is the main event of Fight Nights Global 86. Watch the video and rate this fight!